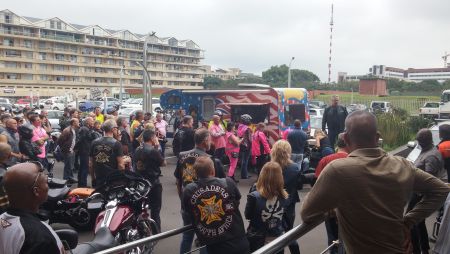 We all know that bikers love raising awareness and funds for a great cause! Harley® riders are no different. With a head count of roughly 80 attendees, the Pink Noise Motorcycle Charity Parade certainly caused a stir on Durban's roads!

Riders began to muster around 9:45 for a briefing and left in formation shortly after to raise awareness for breast cancer. The thundering parade of motorcycles roaring down the highway was quite a spectacle, causing fellow motorists to take note and even wave as the bikers thundered on.

When the mass ride returned to the dealership, riders were able to purchase delicious meals from the Americanteen Food Truck in the parking lot and then start to gather inside for the main entertainment - 6 x LIVE MMA fights! The ring had been set up on Friday already and the atmosphere began to buzz as fighters entered the building. Attendees were treated to mind-blowing action as fighters went head-to-head and sweat splattered on the mat. As the fighters delivered well-aimed kicks, debilitating punches and body slamming, the crowd went wild!

Ending the day on a fabulous note, winners of the raffle prizes were given their hampers and the winner of the national prize, a Street 750 motorcycle, was announced! Congratulations to Ken and Veronica Dyson on winning the bike!

We hope to see YOU at next year's fundraiser!