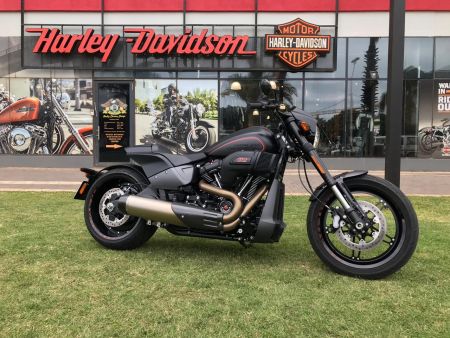 When I was asked by Harley-Davidson® Durban to take the all new FXDR 114 cubic inch Softail® for a test ride, the first thought that jumped into my head was “YES!!!”.

Having ridden Harley® motorcycles for many years and having been involved in the launch of the new Softail® range towards the end of 2017, it’s safe to say that I really enjoy the brand and what it stands for. The new Softail® models have been revolutionary in all respects and have changed the face of the brand significantly. In my humble opinion the new Softail® range, coupled with the introduction of the Milwaukee-Eight® engine have been the most significant developments in the Harley-Davidson® brand in the last 15 years. The R299,900 question on my mind though, was would this FXDR with it’s chunky looks, squat riding position, awesomely imposing 240 rear tyre, and overall street brawler attitude ride as mean as it looked? Read on and find out.

The bike I was given to ride had just over 1000km on the clock and was fitted with a Super Tuner and full Screamin’ Eagle® exhaust system. The pipe is big, and with splashes of titanium and carbon fibre here and there looked the part.  When seated on the bike, you realise that this is a very different machine to the rest of the Softail® family. This bike sucks you in, and immediately you can feel that you are a very key part of the overall geometry.  The bars are wide, to some perhaps, even too wide.  To me, they were a smart move to enable you to effortlessly flick the bike around with that huge tyre on the back.  The trap that the V-Rod® models of old fell in to was being lazy due to the 240 rear section.  Not so on this baby.  She cornered and changed direction easily and almost intuitively with the slightest weight shift or using those impressive handlebars to simply counter steer her through traffic or around long sweepers and tighter twisties. So far so good!

I enjoy riding fast, probably faster than what Harley® motorcycles are ideally designed for, but that’s another discussion entirely! To say that this motorcycle was intimidated by my aggressive riding style would be unfair.  She sucked it up and delivered right throughout the rev range.Pull off in first and give the ride-by-wire throttle a handful and she leaps out of the blocks like a scolded cat!I found the gearing particularly enjoyable with long smooth gears from first through to sixth.  Fourth and fifth gear were a particularly happy place for me as I found the bike really was alive here.  Anything from 4000 rpm upwards was a gas!  This brawler certainly does like having her neck wrung.The gearbox, like all the new Softail® models, is smooth and crisp.  The familiar Harley® “clunk” is still there a little but tends to quieten down when warmer.

Straight line riding on this bike is a dawdle, you could almost leave the bars and she would ride herself down the road. So what about cornering? Will that 240 force her wide and make her lazy?  I am very happy to report that neither is the case.  Although the bike runs out of legs at about 194km/h on the clock, you can chuck her into just about any corner at any speed and she sticks like bubble gum to your shoe sole on a hot day!  No matter how far you lean her over she goes and goes and goes!  The all new Softail® suspension and frame set up work beautifully in unison and allows the rider absolute confidence to drop the bike into a corner and roll on the power.

I did find that at slower speeds (believe it or not there were occasions where it happened) that the bike tends to want to force you upright, but again those handlebars let you counter this effortlessly.

This motorcycle is an incredible addition to the Softail® family, and I am so glad I had the opportunity to put some miles on her clock through traffic and on the open road. This is a hooligan tool that begs to be ridden. The harder the better.