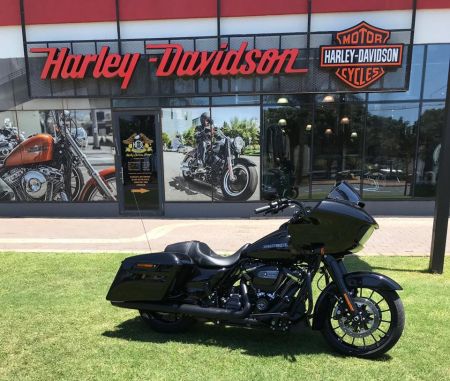 I had the pleasure of riding the 2019 Harley-Davidson® Road Glide® Special this past weekend. I have to say I absolutely love the Road Glide® as a whole, so this was a treat to get onto the brand-new bike with barely 1600km on the clock.

At first glance, the bike is not glaringly different to the 2018 model, however on closer inspection there are a lot of subtle changes to the machine from last year’s model.

The most notable is the increased engine capacity from 107 cubic inches to 114 cubic inches. When riding the bike, the extra engine capacity becomes particularly noticeable. The 2018 model was not exactly lazy, but at higher RPM’s you could feel the motor was working. Not so on this 114 cubic inch power plant. The power delivery is smooth and constant throughout the rev range and with the increased power comes somewhat better fuel economy and a perceptibly smoother power curve. Were it not for the factory restriction of 180 km/h I think this bike would be a top end runner of note!

The other change from 2018 is the new improved infotainment system that has been fitted. It looks a lot slicker and once you are used to the rather cryptic touch screen controls, it is a pleasure to work with. I found the screen a lot brighter and easier to use and read both when stationary and on the move. The old-fashioned rubber buttons are a thing of the past and you are now presented with a smooth and slick system that looks beautiful!

Going back to the motor, although the bike is governed to 180 km/h (the merits of this shall be debated by many riders over time), please do not be fooled that this bike is slow. When the Milwaukee-Eight® motor was launched for the 2017 model year, it was noted that acceleration from 0 to 60 and 60 to 120 was massively improved. I am happy to report that this 114 cubic inch powered machine is lightning fast through the gears and hurtles to 180 km/h like a greyhound out of the starting blocks! The beauty of the power on this bike is that even in 6th (which is essentially an overdrive gear) you can simply roll on and off she goes.

So how does this rather large and bulky looking motorcycle handle and behave when riding slower or faster you may ask? My instant response is that this beast corners like it is on rails. The shark fin fairing, although large, is arguably the best in the entire Harley-Davidson® range. Wind buffet is almost zero at any speed and once you get your head around the dimensions of the bike, you realise that even with a big fairing like this you can easily thread through traffic. It takes a bit more thought initially, but I had absolutely no problem splitting lanes and carving my way through traffic.

The bike is a tourer, so it’s quite a bulky machine. For the newer or less experienced rider, initially it will intimidate. I encourage you, though, to ride the bike and let the low saddle work its magic. Because your centre of gravity is a bit lower, even at low speeds the bike is relatively easy to control and steer. Higher speed cornering is a matter of weight transfer and counter steering. Whilst 180 km/h by today’s superbike standards is not super-fast, the beauty of a usable and ride-able machine is that you can keep it pinned on straights or corners and she just glides along. Given that the weight of the fairing is suspended onto the frame, your steering is super light and responsive, unlike other touring models in the Harley-Davidson® family.

Well done Harley-Davidson® Durban for once again letting me loose on your demo bike. I strongly urge every reader of this article to do the same!