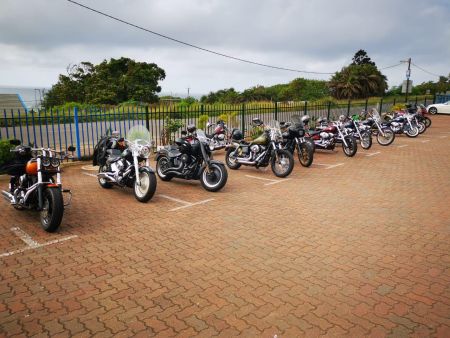 On Sunday 31st March 2019, we hosted our first Annual 4 Point Ride with four checkpoints set out in and around the greater Durban area. The first and last point at Harley-Davidson® Durban, one in Ballito, one in Pietermaritzburg and one in Scottburgh. Every rider had to have their card stamped at each of these points (in which ever order they chose) in order to complete the ride and receive the pin: a memento for their efforts.

Bikers from various different clubs started congregating at the dealership at 8:00am for an 8:30am departure. Our team had no idea who to expect and we found ourselves amazed at the turnout! Durban Free Chapter, DOG Durban, Steel Wings Motorcycle Club, Harley-Davidson Club of South Africa, Widows Sons and more were represented. Riders received their check cards and after a briefing of route choices they were off. Over 60 bikes, 3 different directions and one end goal.

I manned the point at Crossways in Hilton, just outside Pietermaritzburg, Rhys was at The Beach Bar in Scottburgh and Matthew was at Turn n’ Tender in Ballito. Shortly after 10:00am I received news that riders were headed towards me, but I was unsure of how many to expect. Within the hour, I started to hear that unmistakable rumble coming down Hilton Avenue, en route to Crossways. It was go time! The first group of riders arrived and shortly thereafter the rest followed. The easy Sunday morning atmosphere had changed, with head-turning sights and sounds of Harley® motorcycles rolling in. Whilst marking off check cards and chatting with the riders, it was evident to me that everybody was having a fantastic time and really enjoying the day.

With the end in sight, riders then made their way back to the dealership from their last check point. Welcomed by Tren and Nish, completed check cards were handed in and pins were given to those who completed the ride to all 4 points. The afternoon was rounded off with refreshments and a rather large gathering around a braai, where Anthony served up fresh boerie rolls. The atmosphere was festive, filled with laughter and funny stories about the day. People were in high spirits and were already throwing ideas around for next year’s Annual 4 Point Ride!

The event was well received; everyone that I spoke to about the ride said that they really had a great time. With good weather and genuine people on bikes, what more does one ask for? We really appreciate the attendance and support from all the riders as well as the teams at each stop. Our team at Harley-Davidson Durban also did a phenomenal job co-coordinating and making sure everything went along smoothly. We are excited about next year’s ride and would like to thank everyone involved in the event for making it a success. We look forward to seeing everyone again next year for the 2nd Annual 4 Point Ride!