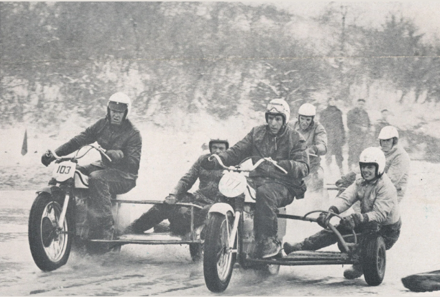 FEBRUARY 1, 1923
The grand opening, held on February 1, 1923, was a great success with many people stopping by to show the boys their support. The boys had even convinced their brother in law, Fred Gilmore, to leave his job on the East Coast to join them in their business venture. Of the three brothers, Finnigan, was probably the best known as he had previously worked for a number of years with renowned H-D Dealer Dudley Perkins in San Francisco. He also competed in hill climb events and played motorcycle polo.

The image shows George standing at the left, Finnigan atop the motorcycle he uses to play motorcycle polo, and Fred on the right.

FEBRUARY 2, 1958
Early that morning, on the recently opened Riverside International Raceway in Southern California, Leonard got off to a fast start in the straightaway time trials with a speed of 117.4 mph. Later in the day he took the 100 mile feature, dubbed the Pacific Coast Championship, beating his next closest competitor, Bobby Sir Kegian, by a full 41 seconds. The Riverside International Raceway was a massive course at 3.3 miles long with 8 turns and a mile straightaway. Leonard’s performance didn’t upset as he averaged an impressive 81 mph in the 100 mile race. The image shows the racers rounding one of the course’s 8 corners.

FEBRUARY 7, 1942
Walter Davidson passed away February 7, 1942. At the time of his death he was president of the Harley-Davidson company. He had a high business standard and was affiliated with the manufacturing and selling of Harley-Davidsons for forty years.  During his career, he also served as a director for the Milwaukee Gas Light Company and a trustee for the Northwestern Mutual Life Insurance Company. In addition to his skills as a businessman, he was an enthusiastic rider and rode Harley-Davidson motorcycles competitively for several years. In 1908 he was awarded a diamond medal from the Federation of American Motorcyclists for his score in an endurance run. His achievements as a competitive rider brought national recognition to Harley-Davidson motorcycles.

FEBRUARY 12, 1961
Harley-Davidson riders won top honors in all four classes at the Michigan State Championship Ice Races held on Fenton Lake near Flint, Michigan. The event had a record number of entrants, 276, despite the winter temperatures. Bert Cummings, a Harley-Davidson dealer from Flint, won the lightweight sidecar class on a Harley-Davidson Sprint model, with Ed Keating as his passenger. Bart Markel later used that same Sprint; sidecar removed, and won the lightweight solo event. Cummings and partner Keating also won the heavyweight sidecar class and Bart Markel finished out the day taking the win in the heavyweight solo class. The image shows Cummings and Keating jockeying for their first place win in the lightweight sidecar race.

FEBRUARY 15, 1920
During the week of February 15th, several experimental trials were held at Daytona Beach, Florida.  Fred Ludlow set the record for an eight-valve on February 13th with a speed of 102.87 mph.  Red Parkhurst broke that record on the 15th with a speed of 103.39 mph.  In addition to breaking Ludlow’s record, Parkhurst also set world records for the one, two, and five mile runs.  On the same day, Ludlow set another record in a four-valve Harley-Davidson by covering five miles in 3 minutes, 56 seconds at a rate of 76 mph.  On February 17th, Parkhurst established four new sidecar records with a speed of over 84 mph in an eight-valve Harley-Davidson “Bullet” sidecar.  The image shows Parkhurst and Ludlow in the “Bullet” sidecar.

FEBRUARY 18, 1963
Willie G. Davidson is probably the most recognizable face of Harley-Davidson. He joined the company on February 18, 1963 with a background in industrial design. At the time, the company had no formal styling department. When he was hired the department consisted of two men, Willie G. and a model maker. Influenced by the growing custom movement, Willie G. and the styling department began experimenting. This resulted in the creation of several iconic motorcycles including the 1971 FX1200 Super Glide, the 1977 Café Racer, and the V-Rod, to name a few. In 1970, Willie G. was named Design Director and later Vice-President of Styling. After nearly fifty years with the company, Willie G. retired in April 2012.

FEBRUARY 28, 1927
While limited, special-order finishes were available as early as 1926, they were not widely publicized. It wasn’t until the 1928 model line that the range of “standard optional” colors expanded beyond shades of gray and olive green (sometimes known as “military drab”). New motorcycles could be found in coach green, azure blue, police blue or maroon, available for a $3 surcharge. Other and less rare stock motorcycles came in two-color contrasting finishes, such as dark blue fenders and gas tank with a cream tank panel. Color options became increasingly popular in this era, especially during the Great Depression, as it was simple and inexpensive way to individualize one’s motorcycle.